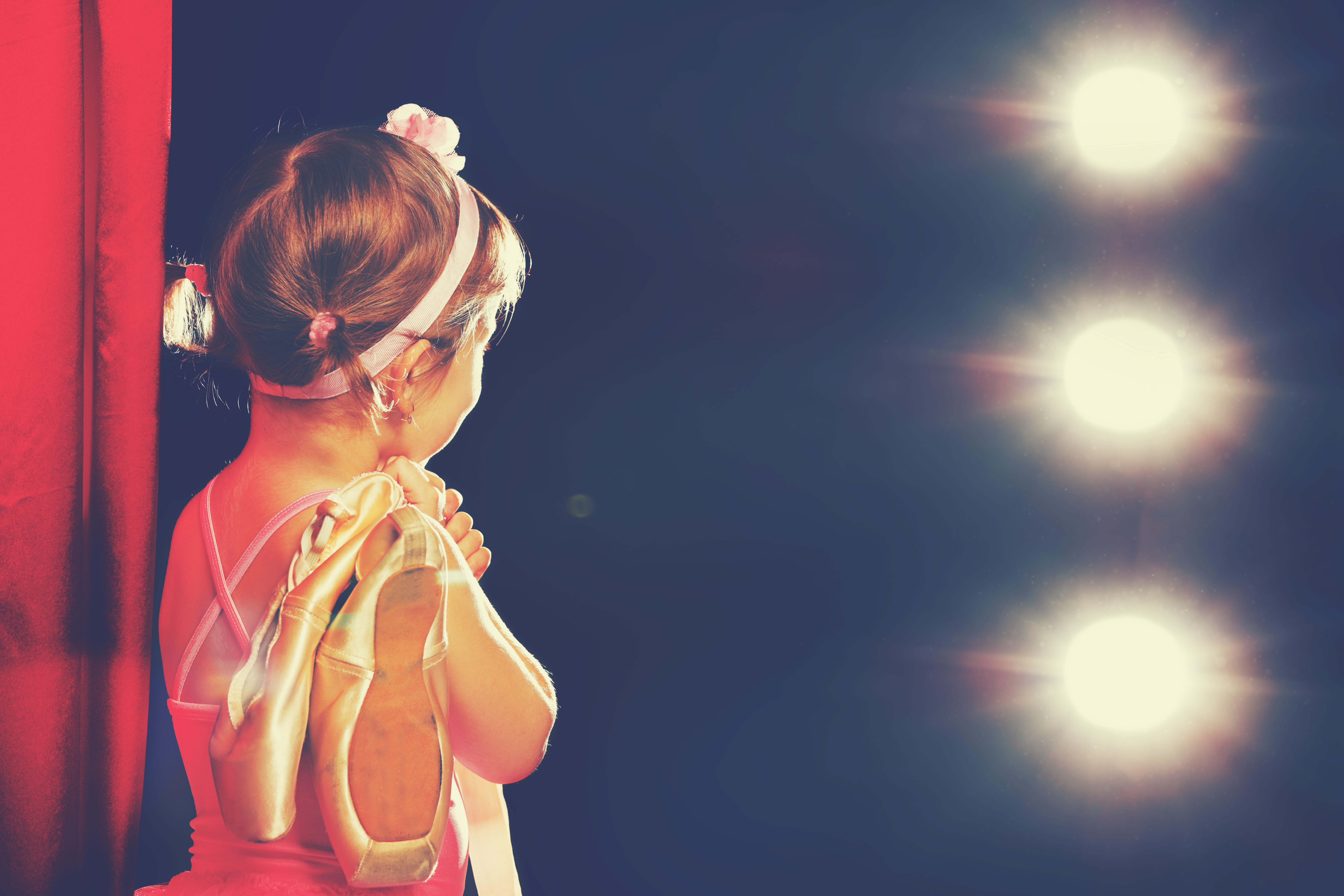 Sweaty palms and a racing heart rate before a performance is a common experience, but serious stage fright can paralyze some dancers and discourage them from getting onstage at all. So how can teachers and coaches support students whose preshow jitters are getting in their way?

Signs and Symptoms of Performance Anxiety

Stage fright, also known as performance anxiety, is a set of subconscious reactions referred to as the “fight, flight or freeze” response. Dancers may experience stage fright before going on, similar to how individuals encounter anxiety in situations like public speaking.

Josh Spell, consulting therapist for Pacific Northwest Ballet, says that while stage fright can feel scary for a dancer standing in the wings, some degree of anxiety before a performance is natural. The sympathetic nervous system triggers a range of symptoms, from clammy hands to crippling anxiety, but Spell frames preshow nervousness as part of a dancer’s preparation that often dissolves once they step onstage.

“It’s different from clinical anxiety,” Spell says, which might cause a dancer to freeze up during a performance or prevent them from taking the stage at all. Spell and other mental health professionals use the Diagnostic and Statistical Manual to categorize and diagnose mental illness. Anxiety, he says, is a high degree of overwhelm “where you don’t have any way of calming your nervous system.” Severe, debilitating anxiety can even cause dancers to feel as if they might die.

Exacerbated by the Pandemic

Spell danced with Pacific Northwest Ballet and Kansas City Ballet before entering the field of social work. He himself struggled with anxiety and eating disorders throughout his career, which is a big reason why he decided to pursue his current path.

Spell states that talking about mental health has become more normalized since he retired, but the pandemic shutdowns and subsequent return to live performance brought dancers’ anxiety to an all-time high. “Dancers were on such autopilot that there was never a moment to stop and acknowledge how anxious, depressed or overwhelmed we were,” he says. “Then you stop. Training has shifted, and you can’t do the things you normally did. Bodies changed—you couldn’t jump, you couldn’t even do pointe work.”

Once dancers returned to the studio, existential questions crept in: “Can I do this again? Did I miss my opportunity? Can I come back?”

During the lockdowns, each level of PNB student dancers participated in virtual sessions with Spell and now have a monthly wellness seminar and mentor meeting with a dancer in the professional company. “It’s more normal to talk about mental health,” Spell says, “and when someone is struggling, it’s not like ‘What’s wrong with me?’ It’s not punitive.”

A Paradigm Shift for Competition Dance

Competition dance is known to be a particularly charged environment filled with high expectations. But Salinas says small shifts in a teacher’s approach can reduce performance anxiety for young dancers. He focuses less on tricks and scores in competitive choreography, emphasizes fundamentals in class and encourages dancers to lean into their training and connect to their artistry.

“I’m trying to help find a way to shift the paradigm,” Salinas says. “The way I do that is by going against the grain. It’s more about feeling. Can you find soul and passion when you’re dancing? If you can do that, then you can probably do the tricks, too.”

“I don’t think I was ever completely confident”

Sarah Lane joined American Ballet Theatre as an apprentice in 2003 and spent 17 years with the company, her last three as a principal dancer. She left in 2020. Throughout her career, Lane says she struggled with performance anxiety. “I don’t think I was ever completely confident onstage when I was a child,” she says. “I never felt like I had the upper hand or like I was better than anyone. I always thought the opposite, like I was the underdog and I needed to work extra hard.”

Lane says she felt tension slowly build leading up to a big performance. “I’m a perfectionist because I care so much about the art and I always feel that I have big shoes to fill. So, my tension didn’t come from a fear of something going wrong as much as it did from the desire to do my best and to do justice to a role.”

Lane experienced muscle tightness, overworking and disordered eating as symptoms of anxiety. “Very early in my career, when I was new and young, I didn’t quite know how to handle the pressure. As I matured, I learned how to have more balance in my life and my mind. Of course there were still moments where lack of rehearsals, unreliable partners, and unhealthy treatment made me very stressed.”

Extra preparation helped Lane handle the stress as she tried to limit the possibility that something might go wrong. “That really helped me,” she says, “but it can go to an extreme.”

While still in the corps at ABT, she was thrown into a lead role in Theme and Variations at the last minute. Earning a reputation for thriving under pressure, Lane found herself in difficult situations throughout her career.

The first time she performed Nikiya in La Bayadère, Lane went onstage having never done a full run-through. At the premiere, her preshow routine was more chaotic than usual. “That ballet is so sacred, so there’s that psychological idea of perfection attached to it,” she says. “In the second act, I didn’t feel as comfortable as I wish I had, but I didn’t have another performance. It was a one-and-done deal.”

About two weeks later, Lane danced the role of Kitri in Don Quixote for the first time without any rehearsals with the company. But this time, she went on feeling calm and collected. “When I remembered how grateful I was to be doing something that I loved, and to have the opportunity to put on a Kitri costume with American Ballet Theatre, that took a lot of the doomsday feelings away,” she says.

Spell states that anxiety builds when dancers paint one picture in their minds about how a performance should go. “That’s often based in perfectionism,” he says. “When you only have this one idea of what’s possible, then of course your anxiety is going to be off the charts.”

To ease stage fright, he recommends talking through multiple scenarios of what could happen, as well as doing things within what he calls the “circle of control.”

“It can be how you warm up, what kind of tea you drink before the performance, how many times you go over the variation you’re about to perform, how many breaths you decide to take, what you decide to wear to warm up in, or how much time you take to prepare. All of those things are in a dancer’s control.”

Outside of that circle is what ultimately happens in the performance. Spell says that controlling controllable factors increases dancers’ confidence that they did everything they could to yield a good performance. The rest is left up to fate.

Lane used routines like listening to music, doing a ballet barre, preparing her pointe shoes and putting on makeup as a calming preshow meditation. But the real preparation came in the weeks and months before, in which Lane found cross-training and practicing roles on her own to be the best way to tamp her anxiety. A favorite mantra before going on was to “embrace the most difficult parts,” a pearl of wisdom imparted by her former Gyrotonic coach, Alejandro Piris Niño, who is now the head physical therapist at Miami City Ballet. “I would think, This is going to hurt, it’s going to be hard, but I’m not going to shy away from it,” says Lane. “I’m going to embrace the hardest part and do the best I can in the moment; that’s all I can do.”

According to Spell, intentional breathing by extending the exhale is one of the best ways to calm the nervous system. Engaging the senses by noticing what you see, hear, feel, smell and taste is another technique. It can help dancers remain in the present moment and try to enjoy the experience.

Salinas encourages young dancers to notice the space when they step into a theater. “Look up at the rafters. Look into the wings. Really be comfortable with the space around you, because it’s not very often we get to have that time to be onstage,” he says.

Salinas also incorporates yoga and meditation into dancers’ cross-training, to enhance the mind–body connection. And he encourages dancers to seek support from a licensed counselor or therapist who can provide them with individualized tools to calm themselves down.

“Performing several times a year builds confidence and mastery too,” adds Spell, who sees performance as a way to ease stage fright, particularly for dancers who feel a sense of relief as soon as they step out of the wings.

Moving in the Right Direction

Spell says more dancers are reaching out for support, which is a sign of positive change that will help ease their anxiety onstage and in the studio. “There doesn’t seem to be the same stigma or shame,” he says. “I’m noticing more comfort in accessing my services just like you would physical therapy.”

But he says that offering wellness services and counseling may not help if the culture of perfectionism in dance doesn’t change. “Change has to come from the top and from the bottom,” he says. “So if we are not changing the structure, then the dancers are still going to be faced with an environment that covets one ideal standard, even if they’re working with a therapist and learning coping skills. That’s where overwhelm can come from. Because it doesn’t feel like there are other ways of navigating the experience.”

Editor’s note: This story has been updated to note that Sarah Lane left (not retired) from ABT in 2020.