Health & Body
True Story: Breaking My Leg Made Me a Better Teacher

When Paula Frasz fell from a horse in 2015 and broke her tibia and fibula, she couldn’t put any weight on her left leg for three months. She continued to teach with the aid of a scooter, also known as a “knee-walker.” (This device allows you to kneel on the scooter and glide, coast, speed up, slow down, stop, turn and back up easily.) Frasz relied on three crucial elements of dance pedagogy—use of vocal description and imagery, student demonstration and mentorship—and made some powerful discoveries in the process. Here’s how she did it and what she learned. I developed a complex and fine-tuned vocabulary of descriptive words and phrases that instantly produced certain physical reactions in my students. I was naturally using ballet vocabulary as we do in every dance form, but the qualifiers were different and more distinct. I could say, for instance, “assemblé in parallel first position collapsing onto the right hip like a paratrooper landing in a parachute fall.” Even if you did not know assemblé or first position, you still could fall like a paratrooper. I did this with every single movement required and wrote the images and ideas in my lesson plans.

Rather than the “do this” command, I was forced to say “try this.” The simple substitution of words seemed to encourage and empower the dancers, especially the less experienced ones. These students typically wait for you to show them what to do, but with the “try this” method, they were forced to make an initial attempt, thereby giving me something to subsequently correct and shape.

Student Demonstrators
I selected various members of the class to translate my movement ideas. This was the kinesthetic equivalent of calling on a student with a raised hand; they had to give me an “answer” of sorts. I took care to not always use the most experienced or talented dancers. We learn equally from correct and incorrect answers. I wanted the students to be brave enough to make mistakes in their movement answers.

Mentorship
I broke students into pairs or groups. More experienced students would immediately assist the less experienced, and, surprisingly, it was often the more experienced student who learned the most. They had to answer questions they sometimes had never considered. When I divided the class into performance groups, partners were very proud when their group members were successful and encouraging when they were not.

Giving Corrections
I leaned on the students, took their hands for balance and often sat on the floor to illustrate some maneuver with arms, torso or upper body. When physical correction was not possible, I used my cell phone to take a picture or video to illustrate a performance or timing problem. Seeing the improper performance on the cell phone video proved a profound insight for many. Some even responded with, “Can you send me that?”

Asking for Help
Overcoming years of entrenched dance teaching stereotypes was as difficult as overcoming my injury. Admitting I needed help was an enormous emotional hurdle, but one that made me more human to the dancers. I became a figure who was struggling physically as, in many cases, they were themselves. I developed very strong emotional relationships with students in my classes during this time.

Sitting to Watch
This was another stereotype I had to resolve. In my years of dance teaching, I had always stayed on my feet during class, never sitting down. I considered this lazy behavior for a dance teacher, a form of cheating. Once forced to sit and watch, I found my focus concentrated on the student. Rather than running around the classroom performing the steps with them, I had to stay in one place, as attentive and focused as an audience member would be. Stillness as a teaching tool had never occurred to me.

Why Not?
While preparing class with my broken leg, I created some of the most interesting and difficult choreography of my career. My students complained, “Paula, this class is so hard!” This is because the reliance on my aging body to perform movement was gone. The movement habits and pathways I had fallen into were removed. I was limited only by my imagination. Taking a movement concept, I would perform what I could and rely on my imagination to fill in the blanks. My mind-set became one of “why not?” rather than “it can’t be done.” 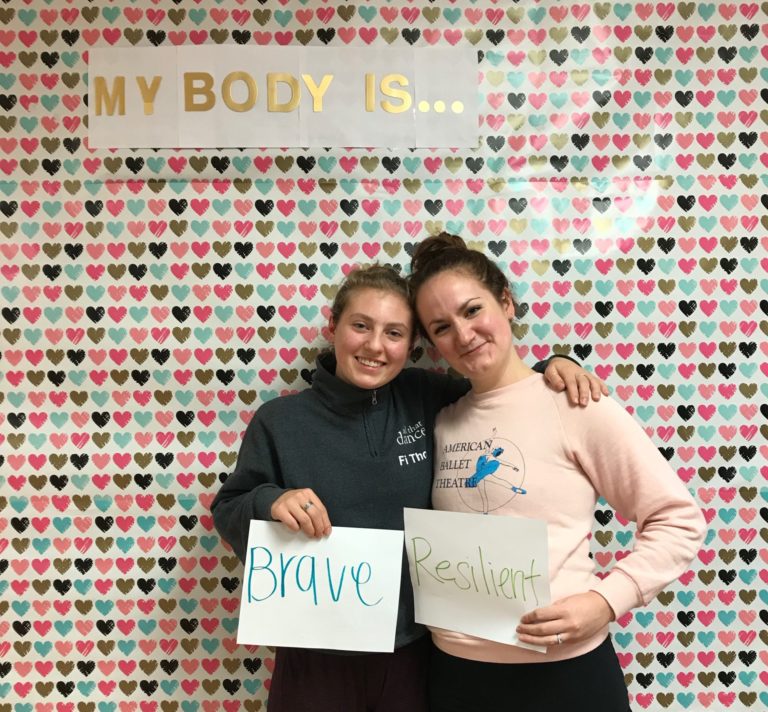 6 Ways to Help Promote Body Positivity in Your Students This Simple Balance Strategy Will Change Your Dancers’ Alignment