High temperatures and sweaty dancers can leave studios smelling like locker rooms, and hygiene can be a sensitive topic for dance teachers with students of all ages. What causes body odor, and what can dancers do about it? As the summer swelter wears on, let’s take a deep dive into the science of sweating.

Many people attribute body odor to sweat, but that’s not the whole story. Sweating is the body’s natural way of staying cool, produced as an involuntary response to increased heat production by contracting skeletal muscles.

“We’re pretty inefficient,” says Dr. Craig Horswill, an exercise physiologist in the department of kinesiology and nutrition at the University of Illinois Chicago. Horswill studies sweat rates, hydration and athletic performance. Prior to returning to academia in 2011, he worked at the Gatorade Sports Science Institute for 16 years. “Only about 25 percent of the calories from energy breaking down goes into the work being done,” Horswill says. “So essentially 75 percent is lost as heat.”

Sweat glands extract water (and heat) from the blood and secrete it on the surface of the skin to be evaporated, cooling the body. Sweat evaporates along a pressure gradient, so you might find more sweat remaining on your skin in hot and humid environments. (Those who’ve grown up in dance studios without air conditioning can relate!)

The reasons why some people sweat more than others are not fully understood, but it’s likely a combination of nature and nurture. Genetics may play a role. Plus, Horswill says, “as a person becomes heat-adapted, they can improve their ability to cool their body through sweating.” Those individuals are likely to sweat earlier into a class or workout. “And that’s a good thing,” he says, because without adequate cooling there’s an increased risk of heatstroke.

“All of us have a specific microbiome,” Horswill says. The gut has natural levels of bacteria, for example, as do the mouth, urinary and vaginal tracts—and the skin. When the bacteria interact with minerals, lactic acid or other substrates in sweat, smelly by-products can result.

The two types of sweat glands, eccrine and apocrine, behave differently. Eccrine glands form all over the body during gestation and are active thermoregulators from the get-go. Apocrine glands become active around puberty and secrete sweat through hair follicles in the armpits and groin—where odors tend to arise.

Dancers can do a few things to curb body odor, including daily showering, wearing deodorant and making sure dancewear is cleaned promptly. Machine washing with antibacterial laundry detergent will ensure anything transferred from your body to your clothes comes out in the wash. Sweaty dancers may find it necessary to change clothes multiple times a day to stay dry and prevent body odor. Postpuberty, keeping the groin and armpits hair-free and clean can stave off bacteria that form near apocrine glands.

Diet also contributes to body odor, particularly high-protein plans and fragrant foods such as garlic, onions and cabbage. Horswill says these, plus additives like MSG, aromatic spices and even caffeine can have an impact. Limiting these before classes, rehearsals or performances could reduce body odor.

Is Body Odor Cause for Concern?

Generally, body odor is little more than an annoyance with possible social consequences. Though rare, some smells can be a sign of disease.

“If body odor changes, that would be something to look into,” Horswill says. Kidney disease is associated with an ammonia smell in the sweat. “And someone who’s developed diabetes might produce more ketones, which give a fruity smell,” he says.

How to Talk About Hygiene

Particularly for teenagers, whose bodies are constantly changing, what worked one day may not work the next. Le-Jurica finds that most students are able to self-regulate. “Sometimes a kid shows up stinky or wearing the wrong undergarments. You give them a week and they come back having figured it out,” he says. “You have to give kids a grace period. Sometimes, as teachers we want to step in immediately and fix problems. That can actually just create more issues.”

In situations requiring an intervention, Le-Jurica approaches the topic on a case-by-case basis. “Body odor is very personal, but it’s also social,” he says. “It’s that fine balance between what you are personally comfortable with and what also is a good move as a community member.”

Le-Jurica usually avoids singling students out unless absolutely necessary. “I’m only able to single certain kids out if I have that relationship built with them already,” he says. As a male teacher, Le-Jurica also finds the topic easier to broach with male students and all-male classes. Depending on the student, there are times he does feel comfortable pulling them aside discreetly to address the concern head-on. “It’s an unsatisfying answer, but it’s situational. There is no way to perfectly approach a kid about how they smell and for that kid to not take it personally.”

Le-Jurica has used reminders about upcoming partnering workshops to promote hygiene to an entire class, hoping the message will reach a specific student. “I said, ‘Hey, partnering is coming up. This is a good chance to check in with yourself.’”

If a student is bullied due to body odor issues, Le-Jurica believes it is important to address the bullies rather than approach the victim about managing body odor, which could further traumatize them. “As soon as they’ve resolved that issue, there’s going to be another way that they diverge from the group,” he says. “Then the group is going to find a way to bully them for that. They’re not being bullied because they smell; they’re being bullied because they’re different.”

He recommends pulling bullies aside and reminding them to focus on themselves. “If what they’re doing is working for them and it’s not ruining your life,” he says, “then I don’t care if that person smells.”

Le-Jurica also suggests communicating hygiene concerns with parents to handle it at home, especially if a student is being bullied. “As teachers, everything we do has to be open to adjusting the game plan,” he says. “I can notice things; I don’t always need to be the person who’s relaying information. I need to be looking at the avenues that are going to be best received.”

“Our Bodies Are Made to Sweat”

By understanding the critical role sweating plays, teachers can foster a healthy, positive atmosphere in the studio and support dancers as they experience changes in their bodies.

Preventing sweat, Horswill says, should never be the answer to hygiene concerns. Overheating can have serious effects on performance, and sweating is the body’s primary mechanism for keeping cool.

“Our bodies are made to sweat,” he says. “I’d rather sweat, stay cool and work on the hygiene end of it.”

3 Reasons to Avoid New Year Diet Trends (and What to Do Instead)
When Students Grieve, How Can Dance Educators Help?
How to Stay Healthy During the Holiday Break
Be the Thermostat: How to Set the Temperature of Your Classroom
5 Healthy Hot Drinks to Cozy Up With This Holiday Season When Students Grieve, How Can Dance Educators Help? How to Stay Healthy During the Holiday Break 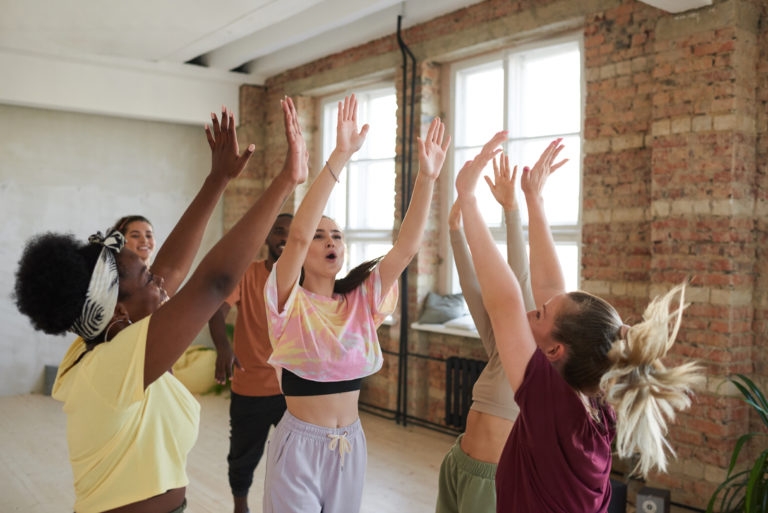 Be the Thermostat: How to Set the Temperature of Your Classroom