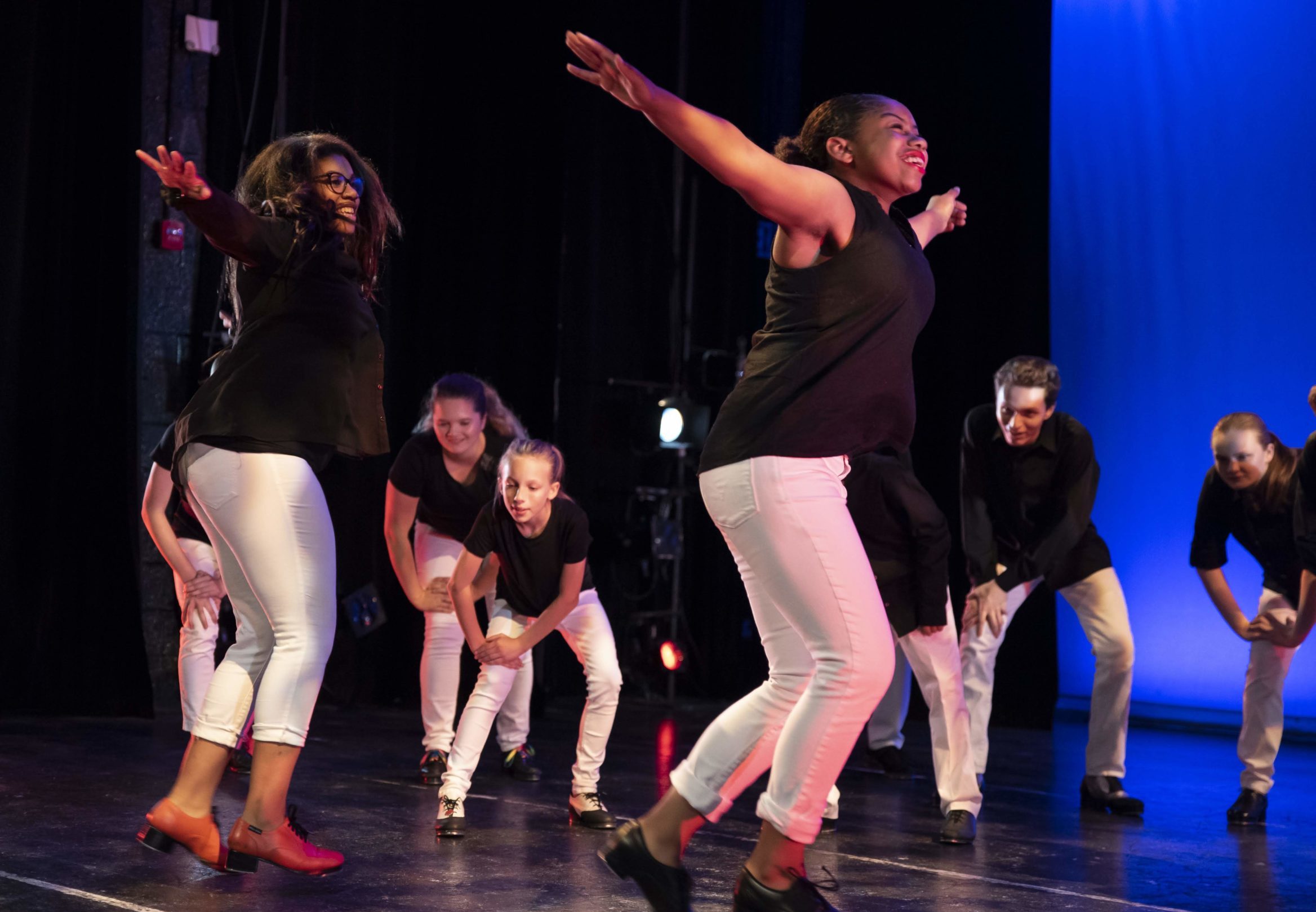 Late May might find many people firing up the grill for a neighborhood barbecue or daydreaming of summer vacations soon to come. But for the tap community, it’s a time of celebration: May 25 is National Tap Dance Day, honoring a distinctly American art form and the birthday of one of its finest practitioners, Bill “Bojangles” Robinson.

Signed into law on November 8, 1989, by President George H.W. Bush, the holiday is marked across the country by performances, master classes, mini-festivals and myriad social media tributes. But it’s not just the pros who commemorate this special day; there are many ways for studios to get involved too. Here’s how three dance teachers are acknowledging the day with their students.

Make It Fun for All Ages

Kelly Kaleta, a Connecticut-based choreographer and performer who teaches at a variety of studios, acknowledges that the timing of National Tap Dance Day can make it difficult for dance schools to celebrate appropriately.

“Unfortunately, it falls during recital season for most studios,” she says, “so class time is mostly for recital preparation.”

Rather than prepare a special event, Kaleta plans games and activities that she can lead within her regular class schedule. She also uses some of these ideas earlier in the year, when she has fewer obligations with her classes and can delve into tap histor

With her adult students, she usually devotes one or two classes to a historical piece of choreography, such as Bojangles’ “Doin’ the New Low Down” or Leonard Reed’s “The Revenge of the Shim Sham.”

For younger learners, Kaleta typically designs a trivia game in the style of Jeopardy! During the pandemic, she’s used the bar-trivia format, allowing students to be socially distanced in the studio and write their answers on separate pieces of paper. With a virtual class, she also had students fill a bingo board with 24 tap vocabulary terms, such as “waltz clog,” “cramp roll” and “Shirley Temple.” As she demonstrated different steps, students had to watch and listen carefully and then check off each step on their cards.

Even before COVID-19, Kaleta had embraced the possibilities of performing virtually. One of her previous Tap Day projects was to ask students from different studios to film themselves performing the Shim Sham Shimmy, the art form’s so-called national anthem, and then combine their submissions to create a collaborative performance video.

Another activity that can make the holiday come alive for students, according to Kaleta, is reading the text of the bill that President Bush signed.

“Recreational dancers often don’t realize that tap dance is so rooted in history,” she says. “It’s important––and really fun––to bring it to their attention.”

The pandemic may have interrupted Capitol Tap’s typical rehearsal schedule, but it hasn’t affected the group’s plans to celebrate National Tap Dance Day. In fact, it’s made Capitol Tap even more special than usual.

“We’ve had a more in-depth focus on making connections with each other and to tap history,” says Lisa Swenton-Eppard, founder and director of the Washington, DC–based youth ensemble.

While Capitol Tap’s home studio, Knock On Wood Tap Studio, will typically host a special guest or event for Tap Day, this year the dancers have a unique project. Each company member has been researching a well-known tap dancer born before 1960. First, they must prepare a brief presentation, including information they learned from talking to the dancer, or someone who worked directly with them. They must also watch a video of their chosen dancer and faithfully re-create as best they can a small part of that performance.

“We wanted to utilize the fact that we were spending so much time sitting at the computer instead of up dancing,” says Swenton-Eppard. “I want the students to embody their dancer to understand who they were.”

The culminating performance on May 22 will take place outdoors at Maryland’s Button Farm. A historic site committed to educating visitors about slavery and the Underground Railroad, it’s the ideal venue to honor a Black art form.

It also underscores the significance of the event in terms of representation and inclusivity. “Marking the occasion can be part of a dedicated effort to change the culture of your studio to be more tap-inclusive,” says Swenton-Eppard.

Take Tap Into Your Community

“Celebrating Tap Day is almost the bare minimum you can do to educate someone,” says TAP DOGS alumnus Anthony Lo Cascio. “This is the basic thing about tap dance that everyone should know.”

Along with his wife, Staci, he directs #Taplife Company, a mentorship and performance program for kids and adults alike. This year will be their fifth annual National Tap Dance Day event, in which they perform Anthony’s original choreography to “Lucky to Be Alive,” a song by New York–based musician Frank Persico that has become the company’s anthem.

To ensure that dancers of different levels can get involved, the Lo Cascios offer beginner, intermediate and advanced versions of the routine. Dancers can learn the steps from videos on YouTube or online classes with Anthony and Staci. On May 25, they’re encouraged to livestream or post a video of their performances, which also makes them eligible for prizes like tap shoes and private lessons.

Though the event is entirely virtual this year due to COVID, it’s typically an outdoor affair, which Anthony says is important both for dance studios and for the art form itself.

“We encourage tap teachers to go out into the community and dance in front of people and let them see you, your studio and your students,” he says. “Once you educate the community, they’re more likely to support you and what you’re doing.”

They recommend studios seek out well-populated, high-profile areas of the community and present a flash-mob–style performance, even if the dancers have to tap in their street shoes. Over time, with community support, the event can grow.

“You want people to say, ‘Hey, May 25 is coming up, are you going to do something again this year?’” Anthony says. “It gives you a chance to be featured on the news and to show that tap dance is a good choice.”

Neither torrential rain nor a global pandemic have stopped the Lo Cascios from producing their annual event, which they say is a testament to how serious the tap community is about their art form and about observing the holiday. “We do something together, COVID or not, no matter where we are,” Anthony says.

How to Build Mental Resilience in Your Students
Roll It Out: How to Help Students Develop a Healthy Foam-Rolling Routine
Ask the Experts: How Can I Train Students for Strong Penchés?
How to Create Your Best New-Normal Warm-Up
Yes, It *Is* Possible to Make Socially-Distant Musical Theater Choreography

Why This School Decided to Hold Its Nutcracker in June

How to Build Mental Resilience in Your Students