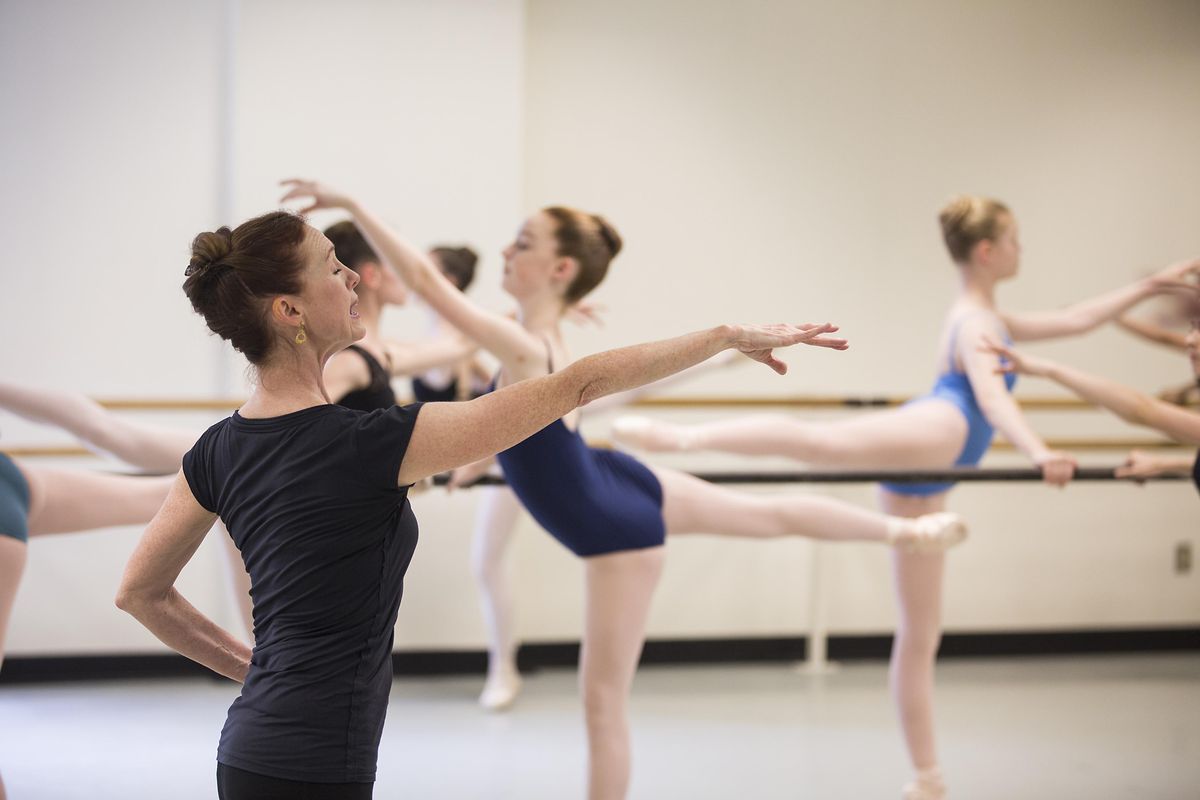 Louise Nadeau praises students for taking performance risks during her classes at Pacific Northwest Ballet. Photo by Angela Sterling, courtesy PNB
Teaching Tips
Yes, You Can (and Should) Incorporate Acting Into Technique Class—Here’s How

The ability to embody a character is essential for dancers aiming for Broadway and classical ballet, but even dancers performing in abstract work can benefit from basic acting skills. And yet, acting is often neglected in dance training—partly because many teachers don’t have much experience with it, and partly because they’re a little busy teaching dancers how to soar in the air and turn like tops.

While dance educators shouldn’t be expected to give full acting courses, they should be able to help their students marry technique with performance. Here’s how to seamlessly incorporate acting and character into your technique class.

Communicate the importance of performance

According to Pacific Northwest Ballet teacher and former principal dancer Louise Nadeau, teachers first need to give their students permission to focus on something other than technique. “Teachers can get so wrapped up in turns and leaps,” she says. “You have to step back and let your students know your class is a safe space to explore and experiment with character.”

One way you can help create this kind of environment is by encouraging students to take performance risks. “Students are savvy and know what elicits a response from their teacher,” Nadeau says. “If I only praise multiple pirouettes and clean petit allégro, then that is where their energy will go.”

Though experimenting with performance may be awkward for your dancers initially, it will eventually become easier with repetition. “I keep telling my students that Zoom classes are a great place to start,” Nadeau says. “It’s just me watching, and I’m saying ‘Go for it,’ so you might as well try some things.”

This approach may take a mindset shift for teachers, as well. Class is short, and you may be overwhelmed with the technique you’re already trying to pack in, but Nadeau says it’s worth dedicating time to acting and expression. “Yes, you need to work hard on technique, but you also need to open your scope of goals, because movement and expression are important too—it’s all connected,” she says.

To get your dancers thinking about embodying their character during combinations, variations or performances, Scott Freeman, founder of The Freeman Studio in New York City and former acting coach for New York University dance students, recommends teaching them to establish backstory. Ask them questions about who their characters are, where they came from, and what they value. Then, challenge them to think about things like the problem their characters are trying to solve, and the obstacles they are facing.

Broadway choreographer and Steps on Broadway teacher Josh Bergasse often explores these character themes in his classes. “This is especially great for younger dancers,” Bergasse says. “They get to make up a story and play make believe while dancing.”

Get specific (and personal)

“Lots of times when we teach, we speak in generalizations,” Bergasse says. “We tell our students it’s a happy song, so they need to be more energetic, or it’s a sad song, so they need to be more internal. That’s not enough. You need to talk about what exactly that sadness means.” For example, if you’d like your dancers to embody heartbreak, have them analyze why they might be heartbroken and how that feeling might impact them.

It may be difficult for dancers to honestly access nuanced emotions. To help, Bergasse sometimes asks his advanced dancers to dig into their own pasts. “I ask them to find what this experience would mean to them personally,” he says. “They don’t ever have to tell me, but they need to know what it is about to them.”

Speak it into existence

If you’re looking to take this character embodiment a step further, Freeman recommends rehearsing a combination while speaking what your character might be thinking during each movement. “What is their inner monologue? If this were a voice-over, what would they be telling you about what they’re feeling, and how each movement depicts that?” he says.

She also asks her dancers to approach combinations through the lens of descriptive words. “What would this look like if you felt flirty or empowered?” she asks. “What would it look like if you were angry or aggressive? Delicate and peaceful?” She says that when she uses this approach with younger students, class can get out of control, and she has to wrangle them back to focus, but it’s one of her favorite tools for getting her dancers to be theatrical.

To make performing more fun for your students, Nadeau recommends dedicating full classes, or sections of class, to experimenting with a theme. She once gave a class with an hour full of combinations based entirely on Swan Lake, making the style part of the exercises, and found her dancers really grew as performers. “They had so much fun doing combinations as if they were the Black Swan, and then again as the White Swan. They got to play around with what kind of attack and flavor they would give each combo.”

Bergasse recommends playing off of the music to create storylines in class. Once, he choreographed a number to Frank Sinatra’s “I Won’t Dance.” Then he asked the dancers to perform the choreography as if they didn’t want to do it. Some stopped intermittently in the middle, some had their feet dance while their upper bodies protested, and others danced while pouting.

Nadeau also teaches her students to get into the style and feel of the music they are dancing to. “Last night the pianist played something from Coppélia, so I told the dancers to do the combination as Swanhilda,” she says. “I familiarized them with the story. I asked them what this combo would look like if they were Swanhilda in the town square with her friends, and the result was really interesting. Some incorporated épaulement, or simply changed their energy, and the combo looked entirely different.”

Remind your dancers to project

Once your dancers have learned how to internalize their characters, it’s time to show the audience. “A trained singer or public speaker learns to project their voice so that it goes to the back row of the theater,” Bergasse says. “Dancers need to do the same. Just because you are thinking it, doesn’t mean the audience is seeing it.”

He recommends freeing your students to lean into bigger expressions. “If you ask students to project sadness the first time you run a combination, then project happiness the next time, they can begin to feel the difference in their movement,” he says. “Then, give feedback when you can see the differences in their performance, so they start to understand what comes across to the audience. It will inevitably be too big, and you’ll have to help them hone it in to make it smaller. It’s easier to pull back a little than it is to open the floodgates.”

How to Navigate Tattoos in Dance and Set Your Students Up for Success
Ready, Set, Move…Under a Strict Deadline!
5 Healthy Hot Drinks to Cozy Up With This Holiday Season
Lesson Plan: Maguette Camara Teaches a Traditional West African Dance
History Quiz: Antonio Gades